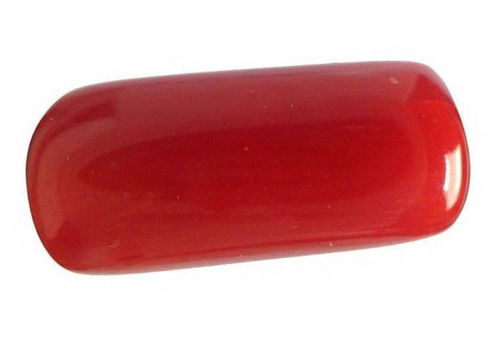 You may know Red Coral with various names such as Moonga, Rakta Prabha, Pagadam and many more. Red Coral is a natural gemstone obtained from the sea, and it is associated with the planet Mars. It is found in the deep and dark part of the sea by a marine animal named Polys. It appears colourless in the depth of the sea, but naturally, it has a dark red colour and a solid surface that is durable.

It's a precious gemstone highly known for its eye-striking red colour. Plus, it is considered that it improves the effects of Mars on a person's life. However, Mars is known as Commander-in-chief among all the planets, and it's critical to acquire the positive impact of Mars. As per the Vedic guidelines, it is appraised for intelligence, bravery, courage, good health and many more that bless a happy and healthy living.

Generally, Red Coral appears in admirable colours, not only in red but also in pink, orange, white, and various colours. It gained a high demand in the jewellery making industry because of its dark hue that quickly grabbed people's attention. Furthermore, it has an important place in astrology and is considered a favourable gemstone for various zodiacs.

Naturally, Red Coral is a concentration of chemical compounds such as calcium carbonate, and it comes in a range of red colour that is highly preferable in jewellery making. Moreover, people are highly inspired by its astrological features and fantastic look, making a unique space for Red Coral in astrology.

If you are looking to buy a Red Coral, getting the best quality by knowing its features and types. However, people get confused in choosing the best quality and type of Red Coral. Triangular, Oval, and capsule-shaped Moongas are highly notable in the market, and different types of moonga have different prices as per their quality and appearance. Here, we enlisted the popular types of Red Coral that are on-demand in the market.

It's a superior Red Moonga that can be not findable on the earth crust as it derives under the sea in the clusters of the marine species. It comes in the shape of a capsule that can be worn as a ring. Furthermore, it is also considered by astrologers as the best Red Coral, obtaining various benefits. It's the topmost Red Coral in quality and quantity and preferred most in jewellery making.

Japanese Red Coral is renowned for 100% authentic positive results in the life of a person. It has an even round and oval shape with a soft and smooth surface that easily fulfils the owner's life with prosperity. You can wear this authentic Red Coral as a pendant and ring favouring your good charm and improving liveliness. It is generally obtained from the deep sited of marines in Japan, and now its mining has been restricted to save the ecosystem; thus, its price ranks in the sky.

Who Should Wear Red Coral?

Red Coral is connected with Mars planet as it has dark red colour as Mars, and as you know, Mars is considered a ferocious planet with aggression. Therefore, red Coral is preferred to wear as it strengthens the weak Mars and improves the wearer's luck. Moreover, it is associated with the great features and stunning appearance that makes it demanded on air.

Astrologers also recommend this stone to people who have failures in their business, weak health and desires to improve their charm. It offers positive effects on the wearer and blesses their life with positivity and good luck. Additionally, Red Coral features several benefits as per the zodiac sign, but there's a procedure to wear that should be flowed to gain its positive effects.

The Exclusive Benefits of Coral Red

If you are suffering from Mangal Dosha, it is recommended to wear this precious stone that strengthens your Mangal Dosh and improves your life with positivity. However, Mars is connected with the blood, immune, sexual, health and property of a person. Therefore, people with weak Mars frequently suffer from health issues and financial problems that can be avoided by wearing Red Coral.

Red Coral facilitates several benefits in an individual's life, and some of the benefits are listed below:

Profitable for business and property matters- This stone favours the features of Mars, and Mars is connected with property and also called Bhoomi Karaka. Hence, by wearing this stone, a person can improve his/her property and business disputes. So, if you are dealing with financial issues because of weak Mrs, wear this stone and get positive effects in no time.

Improve health and immunity- Unlike other gemstones, it attributes good health to its wearer and makes his/her living happy and healthy. It improves the digestive system, balances the blood circulation and overall offers you good health.

Revive your sex life- Red Coral features exclusive metaphysical properties that favour an individual dynamically. It develops new insight and fills you with confidence and new energy that strengthen your mental health. So, to calm your aggression and anxiety, you can wear this fabulous stone.

How To Choose the Best Quality Coral Red

Red Coral is a precious and highly preferable stone among the people because of its astrological features and eye-glazing look. Therefore, it's significant for a buyer to get the quality Red Coral, and several factors determine the best quality of the Coral Red o Monga. However, the price of the stone depends upon its quality, so it is crucial to know about the quality determining factors.

The origin of the stone is the primary factor that determines the quality of the stone. However, the Italian Red Coral is considered the best stone as compared with the Japanese Red Coal.

Colour is also a critical factor that determines the quality of theRed Coral. However, Red Coral does not appear in several colours; it has a range of red colour thaT determines its quality.

Red Coral is a cloudy and opaque stone that features some marks, textures and lustre on the surface. Inclusions are natural that appear in the Red Coral that looks like a blemish on the surface. However, the best quality Red Coral stones come in spotless and smooth surfaces with a dark red colour.

Red Coral is associated with astrological beliefs, and it's the most powerful gemstone among the Navratnas. However, different shapes of Red Coral are associated with different benefits. The tikona moonga is considered the best with quality benefits. It is also called Lakshmi moonga, and people prefer to wear it for good wealth as it is connected with the bliss of Goddess Lakshmi.

Yes, a norm and the wearing rule is connected with the Red Coral to achieve positive effects and blessings. It is recommended to ask an astrologer before wearing Red Coral; however, it should be worn on the ring finger on Tuesday before sunrise. You can wear it in the form of a ring and pendant with silver, gold and panchdhatu.

Astrologers suggest the weight of the red moonga as per the zodiac sign and birth month of the person. However, 5-6 carats of Red Moonga is the accurate weight to wear, and generally, it can be worn in the form of a ring.