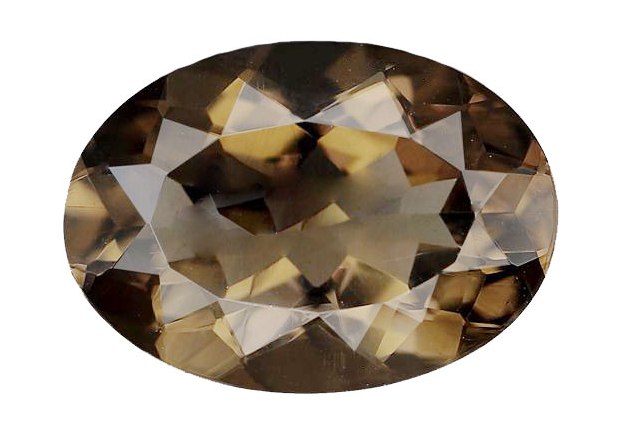 Smoky Quartz is a gemstone that signifies our connection to Mother Earth, and also the lower planets and the transformation of negative energy into positive energy. As among the most powerful crystals for metaphysical arts workers, Smoky Quartz can be used to eliminate harmful spirits or vibes from victims' auric fields utilizing stabilizing techniques or by putting it on the body. This gemstone is accessible across the world including Alps, Minas Gerais, Brazil, and Japan.

Like many other stones with deeper hues, Smoky Quartz has played an important role in spiritual activities throughout time. It was utilized for similar purposes, such as preventing wandering spirits from accessing a family's area by putting it outside of homes or in frames.

Smoky Quartz is also associated with gods of evil like Hecate, Celtic goddesses like the Lord of the Occult and the Black Moon, and the Samhain harvest festival. It demonstrates its ability to function in the dark to process bad vibes and develop a new meaningful change in all of these ways.

It's crucial to note that historical views of darkness frequently had a far more comprehensive approach to darkness and light and were not dualism or connotative of evil.

Smoky Quartz focuses on the god energy that is free and unfettered, as well as the good woman and medicine women of the forest who have formed such a strong bond with Natural Beauty that the two have almost become one. While other womanly stones such as Garnet, Arsenite, and Rose Quartz exemplify the soft, pleasant, nourishing elements of the heavenly feminine, Smoky Quartz relies on the wild, unconstrained goddess energy.

As a result, Smoky Quartz can either emphasize or aid expand this energy that may already be present within you. In addition, smoky Quartz can help you awaken your natural, intuition soul by sleeping with or using it regularly.

Smoky Quartz is also used as an artistic stone, with pyramids, spheres, shells, sculptures, and intricate statues carved out.

Smoky Quartz is a type of crystal that has a few different variants.

● Morion is a smoky quartz type that is super dark and dense.

● Coon tail quartz is smoky Quartz with grey and black bands that alternate.

● A Gwindel is a smokey quartz group of almost similar crystals that are twisted significantly about one another.

Smoky Quartz comes in various colours, ranging from dark brown, and smoky grey specimens are sometimes classified as smoky Quartz. The exact reason for the smoky Quartz's hue is unknown. However, it is certainly proportional to the number of exposure to radiation the stone has had. Organic smoky Quartz is frequently found in granitic rocks that contain a modest quantity of radioactivity that persists over time. The majority of smoky Quartz sold in rock shops and by some gemstone cutters has been artificially toasted to give it a dark black hue.

Smoky Quartz is just one of many types of Quartz. Other kinds that form crystals include the following:

Rose Quartz: It's a variety that ranges to reddish pink.

Amethyst: It's a variety that ranges to purple.

Milky Quartz: It's a variety that ranges to cloudy white.

Prasiolite: It's a variety that ranges to leek-green in colour.

Rock Crystal: It's a variety that ranges to clear, colourless in colour.

Who Should Wear Smoky Quartz ?

These gemstones can be found on a collection of birthstones based on the zodiac signs.

It is simple and can be easily obtained from one of these natural crystals because they are available in several sizes, making it simple to find one that will suit your needs.

The jewellery from Smoky Quartz is simple to find, and the colour of these jewels comes in a variety of tints, making for beautiful jewellery.

Smoky Quartz rings and pendants are popular because they are a gemstone for the Capricorn zodiac sign. Smoky quartz jewels are a great stone to utilise for quartz therapy.

If you're dealing with unwell customers, they're likely to release a lot of negativity, so keep one of these gemstones with you at all times.

When choosing Smoky Quartz jewellery, you may have to evaluate the features you desire based on your purchase purpose.

The Exclusive Benefits Of Smoky Quartz

It is a crystal that allows you to see beyond what is typically obscured in life as if the smoke inside the rock swallows all of the haziness that might obstruct our comprehension of intuitive and mental insight.

However, in more concrete terms, this stone is extremely beneficial. Smoky Quartz can help you develop emotional maturity by assisting you in not reacting to the first spark of sensation that occurs to you.

Smoky Quartz can provide amazing clarity and vision when you're about to enjoy your time and stand back to assess the true situation at hand, as well as its core cause.

It's a great stone for teamwork - not so much for eradicating issues as for assuring that everyone concerned can face them with a clean mind. It can also help with problem-solving innovation and creative thinking.

Smoky Quartz's better qualities, like that of all dark stones, is its ability to remove depression. It "soaks up" the negative energy vibes that surround you, clearing the path for you to enhance your life. However, while some black stones, such as Shungite, can help with negativity removal, they can also have downsides that Smoky Quartz eliminates.

Carrying a piece of Smoky Quartz can be a powerful approach to get to the base of your issues without letting your bad emotions overpower you, especially if you suffer from despair, worry, or envy.

Smoky Quartz is supposed to have a unique capacity to stop the mental "buzzing" created by smog, technology, and other individuals because of its connection to the soil.

It may be the gemstone for you if you are attentive to these aspects in your surroundings or if you have recently moved to a major city and are adapting.

How To Choose the Best Quality of Smoky Quartz

In your hands, feel the warmth and density of the quartz. It's usually of higher quality if it's heavier than a similar size bit of Glass. Before approaching the quartz, make sure to verify the heat of its surface. To the feel, good-quality quartz feels chilly, like Glass; to the touch, a plastic thing that has been produced to resemble quartz feels hot or room temperature. Nevertheless, remember that Glass that resembles quartz will be cold, albeit more acceptable and less variable.

Take a look at the colour of quartz. The markings and colour distribution of naturally produced quartz will be uneven. Look for fractures and fractures in the quartz. When quartz is intact, it is more precious; nonetheless, a piece of naturally produced quartz of an odd colour is still much more valuable and of more superb quality than a polished piece of produced plastic or Glass meant to seem like quartz. The gem's outside may be coated in what appears to be drab rock. Still, the inner core has a glossy, colourful surface, indicating that the quartz was extracted from the earth's surface, suggesting that it is a more significant sample.

Take a close look at the edge of the quartz with a magnifying lens. The texture should have natural imperfections and be stained with white. Glass designed to resemble quartz will be cleaner and have fewer, if any, ridges or stripes on its surface, as well as an even colour distribution that could be attractive to the eye but is not typical of authentic quartz.

Location of The Gemstone

Find out where the quartz came from. You must be able to locate where genuine quartz originated from at the moment of sale. If your quartz has a "Made In" label, it was most likely created from non-quartz components. Also, keep in mind that natural quartz is less costly than produced quartz since it does not need any preparation other than mining.

1. What is the best place to put smoky Quartz?

Smoky Quartz's power functions best when put near the door to best provide its protective purpose. A tower, and also a crystal cluster, can be used for this. Smoky Quartz can also be used in a child's bedroom near a large window or your house office.

Irradiated smoky Quartz does not provide a risk of radiation exposure. However, when you irradiate a crystal, a certain energy is stored in the framework, which might affect the optical characteristics, which is usually seen as a change in colour.

3. Is smokey Quartz treated with heat?

Heat treatments had long been used to improve or change the colour of certain types of crystal quartz. High-temperature amethyst or smokey Quartz, for instance, can convert the stone into a beautiful golden yellow tint.

4. What Chakra is smokey Quartz beneficial to?

Smoky Quartz is a wonderful stone for the solar plexus chakra. Smoky Quartz can also be used on the lowest chakras to provide soothing, stabilizing, and balanced energies.