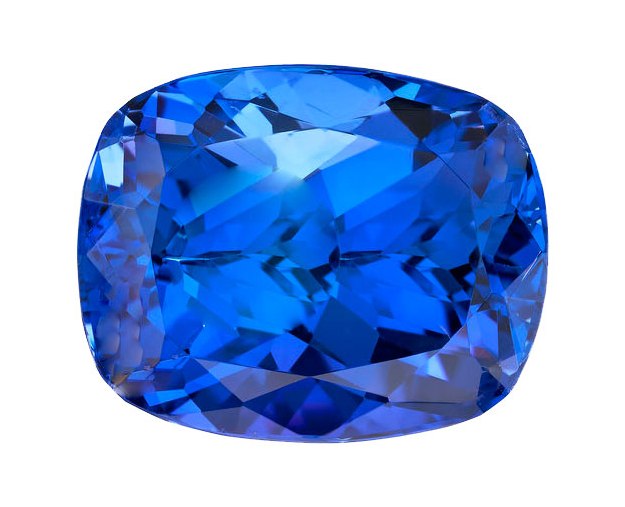 Tanzanite is a gorgeous blue and wonderful violet colored gemstone having mineral zoisite in it which has grown in popularity since the past century, well-known due to its striking color. It is named so due to its original discovery in the country "Tanzania." It is considered a modern birthstone for December month since its addition to the list in the year 2002. It is believed to bring good luck to those people.

It has a composition of calcium aluminum hydroxyl sorosilicate (Ca2Al3(SiO4)3(OH)), which is caused due to the smaller amounts of the element vanadium, having the refractive index of about 1.6 to 1.7 with specific gravity 3.35 and having hardness at Mohs scale 6 to 7. This stone belongs to the mineral group known as epidote. This gemstone is well known around the globe for remarkably strong trichroism, which appears as an alternative blue and violet and burgundy color upon the orientation of the crystal. This looks different when viewed at different angles of lighting conditions.

It gained second most popularity after sapphire in the 1960s. It was initially discovered in Tanzania and found in a small mining area around Mererani Hills at Mt. Kilimanjaro. Even now it is found only in northern Tanzania. These are hard in various forms of jewelry like rings, bangles, earrings, bracelets, etc.

This stone has color varieties only, from blue to violet and greenish color. The trichoism is a very remarkable feature of this gemstone which makes it more ubiquitous.

It appears more bluish in the fluorescent lights, and violet hues are very easily seen when they are viewed under the incandescent illuminated light—this time, when treated with the temperature, treatment brings out its blue violet color of the stone.

Who Should Wear Tanzanite?

According to Vedic astrology, discovering this stone added to the gemstone list as a modern December birthstone in the year 2002 is known as the excellent luck bringing Keystone for the individuals born in December.

Moreover, these gemstones can be worn by anyone who wants to have positive energies to surround them. According to vedic experts this gemstone is associated with the planet saturn whereas, some consider it to be very auspicious gemstone for the people having natives of the jupiter sign i.e. pisces or the Mars sign which is Aries.this stone has no negative effects thats what makes it more special.

The Exclusive Benefits of Tanzanite

Wearing Tanzanite has several benefits. You can wear it to bring any of the following things in your life.

It is known as the modern birthstone for December-born people and found to bring great fortune in the form of excellent career and overall growth opportunities.

It has very miraculous healing properties. In this way, it fights the immunity, decreasing gems and restores the body's immunity, proving their healthy life to the user.

It Strengthens the Bonds

More often, people find themselves unable to grow their professional sectors due to stressed personal bonds. Therefore, it is found to enhance the emotional bonds as well when worn every day.

Sometimes when people face unfortunate times resulting in a considerable loss in business or other things due to the evil energies in that condition this stone is believed to fight with them and restore the fortune.

Enhances the Health and Physical Well-being

This stone is believed to improve the immunity and when the immunity is improved ultimately the metabolism is set to its best condition. Better metabolism helps to keep a good state of mind which affects mental health. And better physical and mental health, more stable will be the well-being of the wearer.

This stone is believed to be very lucky for its wearers; hence, according to astrology, these are found to bring positivity to the environment.

If someone is having trouble in getting financially stable then it is very helpful for those individuals . including that it stays the negative energies away from the life of the person. As it brings fortune and self-confidence in life. Thus, it is believed that this gemstone is used to improve social status .

How To Choose the Best Quality of Tanzanite?

Certain unique features are beneficial if someone wants to identify the authenticity of the gemstone.

Tanzanite is a stunning pleochroic gemstone, and this means it shows various colors when viewed from different directions. Therefore, cutting becomes a very different element that makes it easier to identify the customers while purchasing the jewelry. The more appropriately the gemstone is being cut, the more prominent the pleochroic appearance will show off.

Talking about some particular kinds of Tanzanite shows intense violetish blue color with the red flashes of the pleochroic color directed from the beautiful gemstone. The pleochroic phenomenon is so strong in this gemstone that a wide range of tones is available in a mixture of combined bluish and violet colors. And, the more affordable and widely available gems are those having paler shade than the well-saturated ones.

If a person wants to identify a gemstone with no treatment done over it, they may find those in the color brown. In addition, tanzanite gemstones often found to be out in sale are blue due to the heat treatment, making the gems reveal the breathtaking blues and violets color. Masai tribe members were the first to discover these blue tanzanite gemstones initially because of the natural heat treatment due to their existence in the natural heat source. Usually, these gemstones which are now available in the market are artificially heated.

In addition, some inclusions which are causing an effect on durability may cause an impact on the pricing of the gemstone. Although, gemstones are adequately cut in the faceted form to avoid any visible eye inclusions to maintain their natural beauty. The cat-eye effect can also be seen due to the magnify-able inclusions, but these are very rare.

The cut plays a significant role while cutting the tanzanite gemstone. It is the fineness of the cutting which ultimately determines the visual effect of the rock. Cutters need to understand how to cut correctly to avoid loss of the gemstone's weight. Because failure of the weight will result in the loss of the actual profit of the gem when it is sold, talking about the cutting, it also affects what could to one is doing the process of cutting allowing the more and more color to appear better. Cutting from violet to purple is less rough than cutting to get violetish blue. Violet purple is more plentiful than the stronger blue tanzanites. The cutter should properly determine how it is required to be cut to receive more profit on its sale.

Tanzanite gemstone is available in various kinds of colors, cuts, and sizes, faceted designs. The best viewable amounts are often found in the gems weighing over 5 carats. More pleasing the cutting the better the color.

There is no other location in the world other than Tanzania's northern part. They're also the only known deposit of the tanzanite gemstone under 2.5 sq km around a hilltop near Mount Kilimanjaro.

The alluring blue color of the tanzanite gemstone is due to trace amounts of the vanadium element present. When this genuine gemstone is heated around or over a temperature of 1110° Fahrenheit, in this process, the zoisite mineral, which bears the vanadium in trace amounts, turns into the gorgeous bluish-violet color due to which most people love using the gemstone in their beautiful jewelry pieces.

Yes!! One can wear this beautiful gemstone instead of having a birth month other than december. But, to have the maximum benefit out of it , one should try to consult the vedic expert