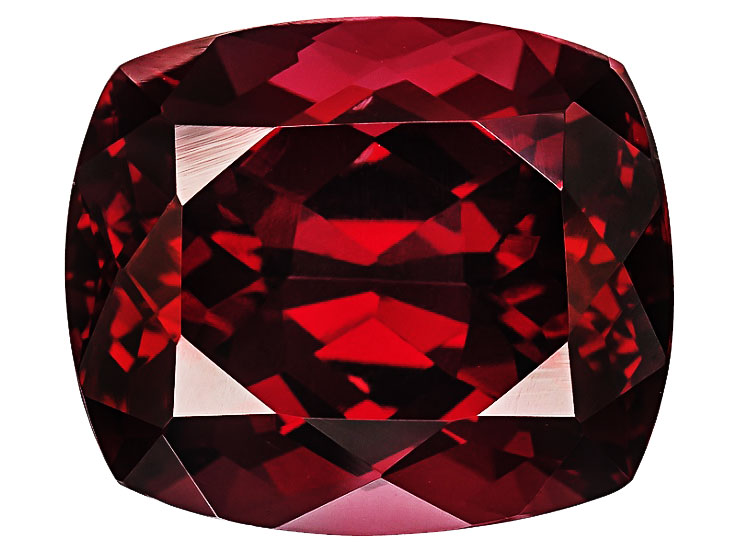 Garnet is a term that refers to a set of minerals. This diversified mineral group contributes to the stone's diversity and the vast orange and red colors. These gemstones have been around for over 5000 years and have shown to be quite durable. As a result, they're extensively used in jewelry and are frequently mistaken for rubies.

The most frequent color of this gemstone is red, but it also comes in green, black, blue and purple. Red Garnet Gemstones include both almandine and pyrope minerals, both of which are isometric crystal structures. Red Garnet Gemstone specimens unearthed in Australia have reached tens of feet wide. The stone is also a prominent East African product.

Individuals who deal with games, stock markets, real estate, sales, import, and speculative industries benefit from the valuable stone Garnet. The color of this gemstone is akin to icing sugar in honey, and it has the look of cow's pee. Because garnet was obtained in significant quantities from Sri Lanka, sometimes regarded as the "Land of Gems," the stone is also known as the 'Hessonite cinnamon stone.'

According to Indian horoscope, the gemstone is connected with 'Rahu,' the 'Asura' ruler. As a result, garnet is the gemstone to wear to mitigate Rahu's negative impacts and seek good fortune.

Garnets have long been considered one of the most valuable coloured gemstones, due to their toughness and sparkle. Garnet is a term that refers to a group of various gemstones. There are numerous different types of garnet, but no single gemstone known as "garnet."

The chemical structure of garnets varies, yet they all have the same crystal structure. Garnet is classified into six separate species depending on their chemical structure. Demantoid, Mali, Spessartite, Hessonite, Anthill garnet, Red varieties, Tsavorite, Rhodolite, Pyrope, and almandine. In addition to these ten species, there are a lot of other garnet varieties that are distinguished in the gem industry based on their colour or other particular properties. Garnet comes in at least 17 various varieties.

Demantoid garnets are a vivid forest green variant of the andradite garnet species first found in the Ural Mountains of Russia. Demantoid garnets are famous in jewelry due to their index of refraction, despite their rarity. It gets its name from the German term for diamond, which refers to its adamantine shine.

Mali garnets come in various colors, including golden to mustard yellow, brown-green, and, on rare occasions. Mali garnets are also remarkable in that they represent a cross between two garnet genus: grossular and andradite. Grossular makes up most of this variety's color, but minor amounts of andradite provide Mali garnets their fire. This type was found in Mali, West Africa.

The color of spessartite garnet ranges from orange to orange-red. The high index of refraction of spessartite garnets provides them a delicious fire and sparkle when cut. It was found in a woodland mountain area in Germany in the 1880s, hence the name. Despite its early finding, spessartite was not widely utilized in jewelry until it was discovered in Namibia and Mozambique more recently.

Hessonite garnet is different from other grossular garnets in that it is orange-brown in colour instead of the usual green. Hessonite garnets are characterised by their unique flaws, which occur as curved zones of varied translucency and are occasionally mistaken with topaz or sapphire. Hessonite garnet is among Ancient astrology's nine planet gemstones, and it is thought to bring success, fortune, and health.

Anthill garnets are one of a kind because they are "extracted" by ants. The ants carry tiny garnets up with the sand and soil as they explore and build their house. Seekers find these jewels as they tumble to the bottom of the slope. Anthill garnets are typically less than one carat in size due to the way they are found.

The most famous red garnet is pyrope garnet, which has the deep pomegranate color most individuals associate with garnets. The word pyrope comes from the Greek word pyros, which means "fire-eyed," referring to the garnet's refractive index after large quantities were found in Bohemia in the 16th century.

This type is a species hybrid that is both pyrope and almandine in nature. Rhodolite garnets are generally free of inclusions and faults, which makes them a popular choice for jewelry when mixed with their lovely color. However, pink and purple sapphires are more expensive, while rhodolite garnets can be more economical.

Pyrope comes in a variety of colours, varying from purple to orangey-red, and is ample in nature. This garnet is very affordable when compared to other garnet species.

The concentration of aluminium silicate is accountable for the intense red colour of this cultivar.

Who Should Wear Red Garnet?

According to horoscopes, garnet provides you success, prosperity, and joy. Individuals in the cosmetics industry, lottery salespeople, stock market dealers, experts in the movie and music serial industries, and chemical laboratory employees are among those who can benefit from wearing the stone.The coloring of this stone is akin to icing sugar in honey, and it has the look of cow's pee. The gemstone is also called 'Hessonite cinnamon stone' since it was obtained in vast quantities from Sri Lanka, which has been known as the 'Land of Spices.'

Garnet can be worn by individuals born in the 'lagnas' of Edavam, Thulam, Makaram, Kanni and Mithunam. Furthermore, according to arithmetic, the stone can be worn if your birth date occurs on days 4, 13, 22, or 31.

Garnet can be chosen to continue a regular life after a person has passed via the 'Rahu' phase. Arnet, Chatham, would indeed be perfect.

The Exclusive Benefits Of Red Garnet

The stone aids in the removal of feelings of anxiety as well as overall health issues.

Wearing this stone helps aid in the prevention of prostate and weight problems.

This helps to strengthen the body shape of the person.

How To Choose the Best Quality of Red Garnet?

Garnets come in a variety of physical qualities, but in general, all facetable kinds form durable jewellery stones. To discover how these gems are evaluated, check out the Garnet Buying Guide.

Color and clarity are very important in garnets of greater sizes. Inclusions, such as small internal diamonds and fractures, should not be apparent to the human eye and should not detract from the elegance of the stone.

Almandine and Pyrope come in a variety of colours ranging between orange to purple crimson. Andradite appears in yellow, whereas spessartine appears in a number of orange tints. Grossular garnets have one of the most diverse colour palettes of every garnet species, ranging from colourless to yellow to red orange and finally to a vivid, bright green.

The clarity of garnet varies depending on the garnet type. The red garnets almandine, spessartite, demantoid, and mali for instance, rarely have noticeable inclusions. Gaze impurities are common in some orange garnets, such as spessartine and hessonite.

Garnets come in a variety of shapes, the most common of which are oval and round.

This cut is well balanced and has a lot of sparkle.

Red Garnet is a gemstone of love and devotion. It enhances emotions and increases sexuality, infusing a relationship with passion, dedication, compassion, trust, honesty, and truthfulness.

It enhances feelings and increases sexuality, infusing a relationship with love, faith, compassion, confidence, and honesty.

Garnets with a dark red tone are the most sought after.This pendant may be found here. In some instances, such as the dazzling green types, vibrant red garnets are more precious than others. For the finest garnets, aim for a bright spectral red.

Garnet must be worn on the middle finger at all times. Garnet must be applied after praying on Saturday morning and washed off with unboiled cow milk.