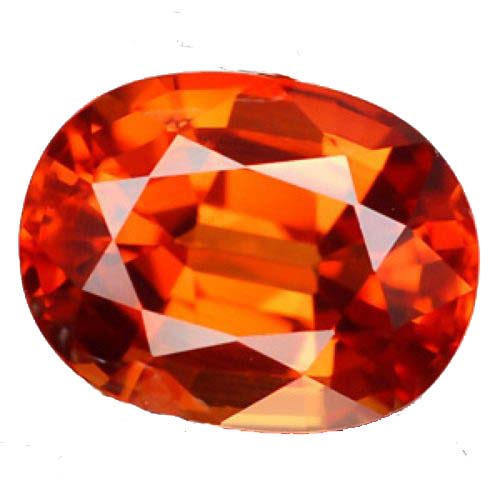 Hessonite is the semi-precious gemstone connected with the Rahu planet and comes in a pleasant honey colour. It belongs to the mineral Garnet family and has a hard surface with seven mohs and a 1.728 refractive index. It holds metaphysical properties and capabilities to heal the problem of the weather. Furthermore, it gains a significant place in the world of astrology because of its astrological beliefs and adornment appearance.

People believed that Hessonite contained spiritual powers that supported the wearer with good health and opened various doors of success. It's a favourable gemstone to improve career objectives, uplift business, and gain success in no time. Scientifically, Hessonite is just a composition of calcium-aluminum silicate so that it reflects brownish-yellow and honey colour. Some Hessonites are also found in green, red, and shades of blue, but the natural one comes in honey brown shade.

Hessonite is known by various names such as cinnamon stone, gomed, and many more. Still, it is primarily connected with the planet Rahu that is considered as the spirituality-induced planet. Consequently, the stone also contains a similar power as Rahu and favors a person with health and wealth.

Hessonite is a grossularite garnet gemstone that comes in a variety of colours and shades. It's easy for an individual to identify the Hessonite among various gemstones as it offers unique colour and appearance. But sometimes, it might be confusing for folks to identify the types of the Hessonite; however, Hessonite is not a single stone. It is derived from the Garnet family that produces numerous stones as Hessonite.

Garnet stones are categorized into various types because of their appearance and chemical composition. Here, we enlisted the foremost types of Hessonite that are as follows:

It generally comes in red colour and appears as pyrope gemstone. However, pyrope contains magnesium, reflecting red, but almandine is filled with iron compositions, so it offers a red hue. It is primarily found in various countries, including India, Brazil, Madagascar, the USA, and Sri Lanka.

It features orange and yellow colour as it contains magnesium particles that offer it a rich colour. Namibia is worldwide famous for producing Spessartite. Furthermore, it is also found in several countries such as Myanmar (Burma), China, Kenya, Brazil, Madagascar, Namibia, Sri Lanka, Tanzania, and the USA.

It is identified as the purest form of garnet stone and the most burdensome stone formed with the composition of calcium and aluminum. Additionally, it holds power to transverse its colour.

This is the only stone in the garnet stone family that features variant hues, and generally, it appears in red because of the presence of iron. Russia, Korea, China, Zaire, and the USA are known for producing Andradite garnet stones.

This stone featured green colour and was used among people from ancient times. There are numerous countries where you can easily get Uvarovite at a very reasonable price.

Who Should Wear Hessonite?

Hessonite is a productive gemstone that is inexpensive and favours a person in improving their luck. It is used for various astrological purposes as it is connected with the Rahu planet and appears in brownish-orange and deep honey colour. Furthermore, it is suggested to wear Hessonite with 1/10th of your body weight.

As per the Indian Vedic astrology, it's a favourable gemstone for Kumbh Rashi. But in western astrology, it is considered the birthstone of January and prescribed for the Gemini zodiac sign. Moreover, Libra and Taurus can also wear this authentic stone to boost their lucky charm. Astrologers recommend wearing this semi-precious gemstone with silver as its power declines with any other metal. So, silver is the perfect metal that stimulates its strength and favours the wearer with great opportunities and good health.

Every gemstone is associated with some metaphysical powers and norms to wear the stone, and if it doesn't get followed in a significant manner, it can cause worse effects on the wearer. Consequently, it's crucial to consult with an astrologer before wearing Hessonite. However, it is suggested to wear Hessonite on Saturday as it resembles Rahu's properties.

The Exclusive Benefits of Hessonite

Hessonite is known by various names such as Gomedh, Gomed in Hindi, and Rahu-Ratna as it features the properties of the Rahu planet, and people recognize this flawless stone with many other names. It is widely known for its appealing appearance and metaphysical properties that support a person with plenty of benefits.

Boost income- Hessonite is helpful for its native horoscope as it increases the income of the wearer by developing more opportunities. It is useful in improving the profession of an individual.

Adore you with Name and Fame- People believe that Rahu favours a person and strengthens their personality when it comes to the accurate position of an individual's horoscope. It is beneficial in improving the social relations of an individual.

Increase the Intelligence of an Individual- If you seek to develop your critical thinking, Hessonite gemstone is the best to wear as it bestows its owner with confidence, clarity, and an open mindset by easing all the stress and worries.

Improve Mental Health- By wearing Hessonite, a person can improve their mental problems and strengthen their mind to deal with daily issues. Furthermore, it generates new ideas and opinions in a person's mind.

Helpful in Respiratory Problems- Hessonite is beneficial to eliminate your health issues, especially respiratory problems. It holds the power to cure Asthma, indigestion, and anxiety.

How To Choose the Best Quality Hessonite?

Gomed is an imperative gemstone containing numerous astrological benefits and metaphysical properties. It's an inexpensive gem but features mystical and powerful energies like other expensive gemstones. However, the benefits are only obtained from a real gemstone; hence, it's crucial to buy an authentic one by evaluating its quality. Unlike other gems, its quality depends on three factors; origin, colour, and clarity.

Colour- It's a critical factor that determines the quality of Hessonite. It comes in variant shades, but primarily honey-yellow and brownish coloured Hessonites are the best to wear.

Don't clean Hessonite with strong chemicals, as it can ruin the beauty and authentic appearance of the stone. Experts suggest, dip and wash the Hessonite in Ganga Jal or Cow milk and dip it for a minimum of 10 minutes; it purifies the Hessonite and brings back a new kind of energy in the gem.

Astrologers recommend wearing transparent, dark saturated gemstone with intense colour and no inclusions; it favours a good charm for its owner and avails them with plenty of benefits. However, Hessonite obtained from Sri Lanka is an ideal gem as it features vivid shine and clarity.

Gomed is an ideal gemstone that brings happiness and success to the wearer's life. However, you can wear this precious stone on your ring finger and rebuild your life with prosperity. Astrological beliefs are connected with this gemstone; hence, it is suggested to wear it with the advice of an astrologer.